Leeton Show Society received grant funding to build an exhibition space at the Leeton Showground for their annual event. Committee members required a multi-purpose shed structure to serve as many members of the community as possible. Some out of the box thinking led them to build the steel structure over a netball court, creating an all-weather court as well as the exhibition space.

The annual Leeton Show, like many others around the country, was cancelled in 2020, leaving a $40,000 hole in their budget. Many businesses and families who usually sponsor the show, came on board to help them out with tasks like digging pier holes and supplying concrete. Steelcorp worked with these local community businesses to ensure the job was completed.

To achieve the goal of being a multipurpose space, the structure was built to meet Netball Australia guidelines, including being 6m tall to ensure good natural light. The structure took about a month to install, with about a week lost to wet weather.

Leeton Show Society president Bill Aliendi says he had already received eight quotes when he approached Steelcorp about his project.

“I started talking to (Steelcorp General Manager) Josh and got a bit serious,” Bill says.

So what was it that made Steelcorp stand out from the crowd.

“I don’t think the push was there, there was no urgency for us to make up our minds straight away,” Bill says.

“All the other companies wanted us to say yes or no, they were even chasing us on our Facebook page. We were allowed to make our own mind up in our own time. Being a show society, we only meet once a month so this was very important to us.”

Bill says he felt like he was partnering with Steelcorp on the project, not being pushed into it.

He was also happy with how the fabrication and installation went.

“The thing is, they didn’t just take your money and run,” Bill says.

“It was the first time I had done anything like that.

“I was very impressed and I couldn’t speak highly enough of the care they took.

“The same could be said for Savage Lifting and Construction who did the install work – I’d give them a 10 out of 10.”

The roof lift attracted a crowd of about 100 onlookers. 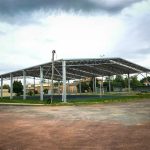 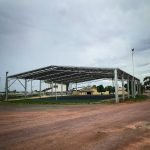